Return to your topic: Adoption organization liability for dog bites

The Legal Duties of a Transferor 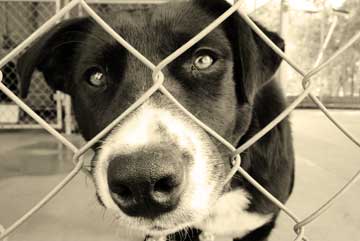 Sellers of dogs (private or commercial), public or private animal shelters, and rescue organizations and adoption groups (including non-profits) (collectively referred to as "transferors") have certain legal obligations when they place a dog with a new owner. A breach of any of those obligations can result in civil liability and even criminal charges, and can lead to public mistrust.

The prior owner of a dog cannot normally be held responsible for harm caused after ownership is transferred, provided that the prior owner retained no further interest in the dog and did not misrepresent its temperament or warrant that it would not create the harm in the future. For an excellent discussion of various possible causes of action based on harm occuring after transfer of ownership of a dog, see Blaha v. Stuard (2002) 640 NW 2d 85 (South Dakota Supreme Court).

Civil liability will result from adopting out a dog that is known to be dangerous, is known to have dangerous propensities, or is misrepresented as being safe when the transferor has no reasonable basis to make that representation.

A dog known to be dangerous or vicious must be put down or cured of its potentially injurious tendency. (For definitions and a discussion of the concepts of dangerousness and viciousness, see Dangerous and Vicious Dogs.) The need to euthanize an animal is one of the foreseeable burdens of animal ownership. Even the jurisdictions that have a "no kill" policy acknowledge that some animals must be put down. For example, the State of California has decreed that "[i]t is the policy of the state that no adoptable animal should be euthanized if it can be adopted into a suitable home." Cal. Civil Code sec. 1834.4. The state has also determined that "[i]t is the policy of the state that no treatable animal should be euthanized." (Ibid.) Despite these policies, however, section 1834.4 permits euthanizing an animal unless it has "no sign of a behavioral or temperamental defect that could pose a health or safety risk or otherwise make the animal unsuitable for placement as a pet...." There are other exceptions as well.

It should be noted that when mention is made of putting down a dog because of its dangerousness, we are referring to a particular dog that has manifested dangerous or vicious behavior. There is no law in the USA, either enacted or proposed, which would require the gathering up and methodical killing of dogs because of their breed. (For more about breed specific legislation, see Breed Specific Laws.)

A transferor may also be liable for breach of a promise, representation or warranty. These can be made orally or in writing, and can be express or implied. A common problem is the transferor who says a dog is safe with children and other animals when, in fact, the transferor has no reasonable basis for making the assertion. At the present time, there exist a number of temperament tests for evaluating whether a dog is suitable for placement, but despite the practical advantages of such tests, their use has not become so universal as to provide a reliable shield against liability. Therefore it is difficult under any circumstances to predict that a dog will be safe in a new environment.

All too often, transferors go so far as to lie about a dog's suitability, saying a dog is safe when they have not investigated its history, evaluated its temperament or observed it for a sufficient amount of time. This is especially egregious when the dog was received under circumstances that strongly indicate it was a potential danger to animals or humans.

Rescues and animal shelters often misrepresent the temperament of dogs. Additionally, these organizations and agencies even go so far as to warrant dogs as being safe despite knowing that they are prone to attack people. An expose by Colleen Lynn of DogsBite.org provides vivid examples of what amounts to criminal fraud in the practices of a government-run animal shelter in California. See What's Behind the Click and Bait Web Advertisements of Aggressive Shelter Dogs Available for Adoption Today? An example from that article: 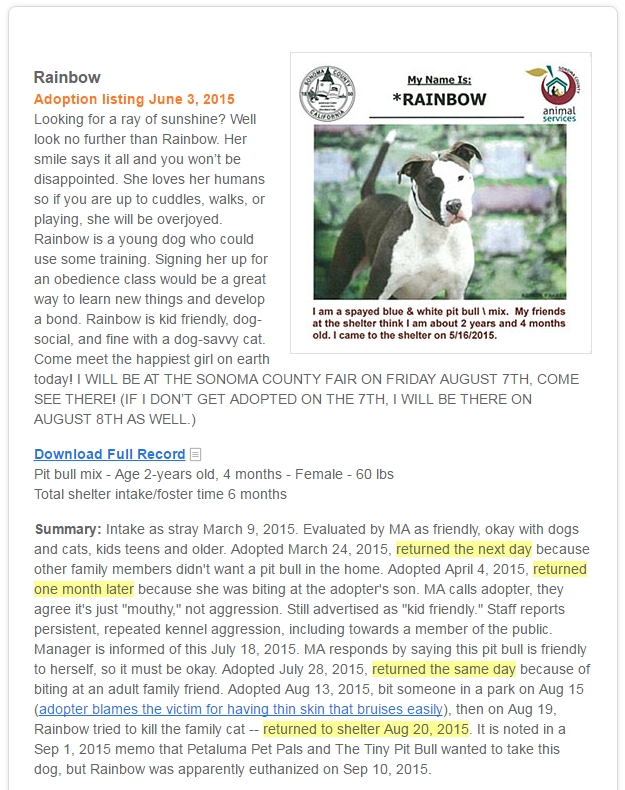 The motives for releasing vicious dogs to unsuspecting families with children range from overzealous commitment to preventing the animals from being euthanized, to slavish devotion to maintaining the appearance of being a "no-kill" shelter. The methods used for tricking people into adopting unadoptable dogs include misuse of temperament tests (see Alexandra Semyonova, Behavior Testing Shelter Dogs -- The Reality of Where We Are Now) and "dog laundering" which is the term coined by Attorney Kenneth Phillips to describe the practice of moving a dog from one group to another for the purpose of sanitizing its record of vicious behavior toward people and animals. (See Phillips, Don't Support Dog Laundering.) In some cases, vicious dogs are stolen from shelters so that they can be released illegally into the community or even adopted out to a family. (See Associated Press, More dogs stolen from Columbia animal shelter.) In one notorious case, a dogo Argentino that killed a man in New York was released for rehabilitation to a rescue group in Ohio, and then was stolen. (See Jim Sielicki, BLADE, Dog freed in murder stolen from local kennel.)

The following animal shelters have recently been implicated in "dog laundering" schemes to re-home vicious dogs with unsuspecting families:

The consequences of re-homing vicious dogs are often drastic. On April 29, 2016, a pit bull-mix rehomed by the San Diego Humane Society killed a baby, 3-day old Sebastian Caban. (See Colleen Lynn, 2016 Dog Bite Fatality: Pit Bull Rehomed by Humane Society Kills Newborn Baby.) Temporary fosters working with adoption groups and rescue groups have been killed and injured. (See Rebecca Carey, Georgia Student, Killed By Dogs She Rescued.) Dog bites increase in frequency throughout the geographic area. (See Dog Bites Increase 35% in Austin After the Adoption of 'No-Kill' Policy.) The acting director of the Fairfax County Animal Shelter resigned during an investigation of its adoption practices. (See WUSA9, Multiple dog attacks inside animal shelter.) A horrific example that led to the permanent disfigurement of a toddler occurred in 2017 (see Merritt Clifton, Anatomy of a Disfigurement by a Misidentified Shelter Pit Bull.)

The policy of many shelters is to refrain from gathering information about dogs, and to simply pass the dogs along to new families without providing any information about the animals. This policy ignores the obvious risks of this practice and the reasonable expectations of the public, and as such is not only a breach of that trust but also may result in civil liability. Breach of duty does not take place only where the transferor makes statements about the dog. A shelter that places dogs into the homes of families should know that the public expects that only suitable dogs will be placed. Essentially an implied warranty of suitability arises from the very relationship between the public and the shelter. People have the right to expect either a suitable dog or at least a full disclosure. In Brooke Brown v. Southside Animal Shelter, for example, the Indiana Court of Appeals made it cler that a shelter has two duties to potential adopters of dogs: first, to disclose what they learned or reasonably should have learned about the dog's temperament, and second, to actively seek out information about the dog's temperament. (Page 11 of the court's opinion, 20A-CT-00066 [October 2020].)

There can be criminal consequences if a dangerous dog from a shelter seriously injures or kills someone in the new household. In recent years there have been at least two criminal prosecutions of adoption agencies and their volunteers. In one case, an agency placed a dangerous dog with an elderly woman and, 10 days later, it brutally killed her. It turned out that the dog was accepted by the agency under circumstances that clearly implied that the animal was vicious. A criminal prosecution for homicide resulted.

Such provisions in the adoption documents may cause the transferor to be held responsible for anything that a dog owner can be responsible for -- possible animal cruelty violations all the way to civil liability in the event that the dog bites anybody.

(For further information, see Legal Rights of a Dog Bite Victim on this web site.)

Courts have held animal control departments responsible for the payment of compensation to victims of dog attacks that resulted in part from animal control negligence. See Animal control liability for dog bites. Suits against such defendants can be difficult and result in unsatisfactory resolutions because they are subject to special rules and limitations (see below).

The liabilities, immunities and special procedural protections available to governmental entities and their employees may restrict claims against them. These include a short statute of limitations, expanded defenses, and low limits on the compensation that the victim might receive. Some aspects of this topic can be found in Special rules for governmental defendants, but you are advised to consult with an attorney if your claim involves a governmental entity or its employees, because these rules are frequently hard to understand and difficult to apply.

Historically, humane societies were created to be agents of the state for the purpose of enforcing laws to protect animals from cruelty and protect people from dangerous animals. See Humane society historically was agent of the state.

A transferor can avoid liability for dog attacks by establishing policies which ensure that dangerous dogs are not adopted out, potential new owners are fully informed about the temperament of available dogs, and a proper transfer document is executed by the parties. See How a transferor can protect himself from liability for breach of duty to the new dog owner.

The directors, members, agents and employees of adoption organizations also can be held liable for harm caused by dogs after they are adopted-out. See Avoiding liability for mistakes and decisions of the board. 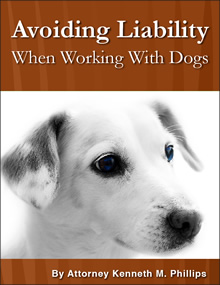