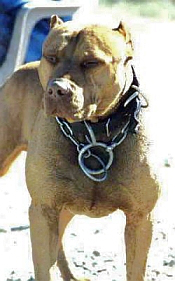 "Ban the breed. And aggressively prosecute the owner of any vicious dog, of any type." The Bay City Times says that not only pit bulls but other dangerous dogs need to be eliminated, because of the horrible injuries and deaths they inflict regularly. (Click here to read the article.)

This year's death count can be found on the home page of Dog Bite Law (dogbitelaw.com), and details about canine homicides for the past several years are at Dangerous and Vicious Dogs.

Before jumping on the bandwagon of this or any other solution to the dog bite problem, read Preventing Dog Bites. I and many other experts feel that, rather than banning any breed, the most rational and politically "do-able" approach would be to pass laws that would keep certain high-risk breeds away from the wrong people, places and situations.

The Bay City Times is a daily newspaper published in Bay City, Michigan, United States. The paper has a circulation of 33,000 daily and 42,000 Sunday editions, and is the most widely-circulated newspaper in northeastern Michigan. The newspaper began in 1873 and remains one of the oldest newspapers still in circulation.