Liability Based on the Dog Bite Statute in California 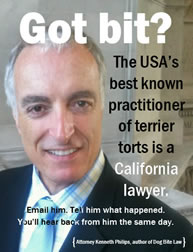 California is a statutory strict liability state. Its dog bite statute makes the owner of a dog strictly liable for any dog bite from the moment that ownership begins, provided that the victim was not trespassing, provoking the dog, injured by his employer's dog while on the job, or performing a paid service involving the dog. (See below as well as Defenses in California and Special Rules Where the Victim Is a Child.) The victim is not required to prove negligence or anything else. Here is the text of the statute:

(a) The owner of any dog is liable for the damages suffered by any person who is bitten by the dog while in a public place or lawfully in a private place, including the property of the owner of the dog, regardless of the former viciousness of the dog or the owner's knowledge of such viciousness. A person is lawfully upon the private property of such owner within the meaning of this section when he is on such property in the performance of any duty imposed upon him by the laws of this state or by the laws or postal regulations of the United States, or when he is on such property upon the invitation, express or implied, of the owner.

(b) Nothing in this section shall authorize the bringing of an action pursuant to subdivision (a) against any governmental agency using a dog in military or police work if the bite or bites occurred while the dog was defending itself from an annoying, harassing, or provoking act, or assisting an employee of the agency in any of the following:

(1) In the apprehension or holding of a suspect where the employee has a reasonable suspicion of the suspect's involvement in criminal activity.

(2) In the investigation of a crime or possible crime.

(3) In the execution of a warrant.

(4) In the defense of a peace officer or another person.

(d) Subdivision (b) shall apply only where a governmental agency using a dog in military or police work has adopted a written policy on the necessary and appropriate use of a dog for the police or military work enumerated in subdivision (b).

Several important points about the statute must be noted:

Some municipalities in California and elsewhere have enacted their own laws of strict liability. Here is an example from the Beverly Hills Municipal Code:

A. Any person owning, controlling, or having care or custody of any animal shall be liable for any injury caused by such animal, and for any damage caused to any public property, or to any private property.

Note the advantages of proceeding under a law like the above quoted Beverly Hills code section:

Statutory liability based on ownership of the dog begins the moment one becomes the owner. Menches v. Inglewood Humane Society (1942) 51 Cal. App. 2d 415, 418. In Menches, the court held that the victim who purchased the dog from the local humane society only 10 minutes before being bitten could not sue the former owner because ownership became absolute upon delivery of the animal to plaintiffs and the payment by them of the impounding fee. The court also said, “The fact that the ownership had been vested in plaintiffs only ten minutes does not minimize or alter the significance of the acts of the acceptance of the dog and the payment of the required fee. Their title to the dog became vested in plaintiffs just as conclusively as though they had housed him for more than three years and had asserted adverse title to him.”

The statute is "designed...to prevent dogs from being a hazard to the community." Davis v. Glaschler (1992) 11 Cal.App.4th 1392, 1399. It does this by unequivocally placing the burden of dog bites upon those who choose to have dogs. Because "the owner is virtually an insurer of the dog's conduct" (Massey v. Colaric (1986) 151 Ariz. 65, 725 P.2d 1099, 1100, interpreting Arizona's identically worded dog bite statute), a responsible dog owner is expected to be vigilant in preventing his dog from biting anyone.

The statute also benefits the public by reducing the conflict that otherwise could follow a dog attack. Because liability is automatic, the dog owner and the victim can maintain their personal relationship unharmed by the threat of litigation, accusations of wrongdoing, or a drawn out claims process. This is important because 75% of the time, the victim is a family member, neighbor or friend of the dog owner.