Return to your topic: Legal right to use service animals 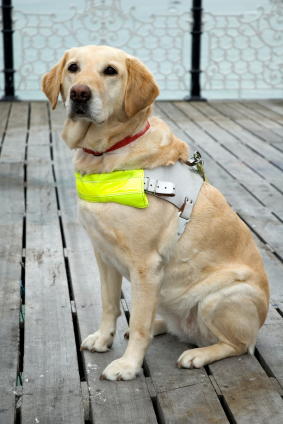 Individuals with disabilities are entitled to the assistance of a service animal. With few exceptions, landlords cannot refuse to rent to a person because of his service animal, and privately owned businesses that serve the public, such as restaurants, hotels, retail stores, taxicabs, theaters, concert halls, and sports facilities, are required to allow people with disabilities to bring their service animals onto business premises in whatever areas customers are generally allowed.

The sources of this rule include the Americans with Disabilities Act (ADA), 42 U.S.C. sec 12101 et seq., state statutes, and local ordinances (including those of cities and counties). While the ADA does not mention service animals explicitly, it has been interpreted as giving disabled people the right to be accompanied by service animals. (See U.S. Department of Justice and the National Association of Attorneys General Disability Rights Task Force, letter dated July 26, 1996.) For an example of state law, see California Civil Code section 54.2:

54.2.  (a) Every individual with a disability has the right to be accompanied by a guide dog, signal dog, or service dog, especially trained for the purpose, in any of the places specified in Section 54.1 without being required to pay an extra charge or security deposit for the guide dog, signal dog, or service dog.  However, the individual shall be liable for any damage done to the premises or facilities by his or her dog.

The violation of a disabled person's right to be accompanied by his service animal can be prosecuted as a crime. See for example California Penal Code section 365.5:

365.5.  (a) Any blind person, deaf person, or disabled person, who is a passenger on any common carrier, airplane, motor vehicle, railway train, motorbus, streetcar, boat, or any other public conveyance or mode of transportation operating within this state, shall be entitled to have with him or her a specially trained guide dog, signal dog, or service dog.

(b) No blind person, deaf person, or disabled person and his or her specially trained guide dog, signal dog, or service dog shall be denied admittance to accommodations, advantages, facilities, medical facilities, including hospitals, clinics, and physicians' offices, telephone facilities, adoption agencies, private schools, hotels, lodging places, places of public accommodation, amusement, or resort, and other places to which the general public is invited within this state because of that guide dog, signal dog, or service dog.

(c) Any person, firm, association, or corporation, or the agent of any person, firm, association, or corporation, who prevents a disabled person from exercising, or interferes with a disabled person in the exercise of, the rights specified in this section is guilty of a misdemeanor, punishable by a fine not exceeding two thousand five hundred dollars ($2,500).

These laws have been abused to a degree that is both absurd and disgraceful. In addition to bringing vicious dogs on board commercial passenger aircraft, people also have brought pigs, lizards, monkeys and other animals. Their justification has been that they needed the animal for emotional support. Federal and state laws are so poorly drafted that they seem to allow this; additionally, denying a disabled person the right to be accompanied by his or her "real" service animal carries heavy penalties which businesses are afraid of. As a result, abuses occur daily in great numbers. The victims of these abuses are the public in general and handicapped people specifically, because legitimate service animals have become suspect as a result of being confused with fake "emotional support animals." The greatest victims might be the people who have a genuine psychiatric disorder with a legitimate need for emotional support from an animal.

Federal law confusion results from the laws pertaining to employment, housing and access to aircraft. There is no confusion, federally, about emotional support animals: the law specifically excludes them.