Return to your topic: Legal rights of dog bite victims in the USA 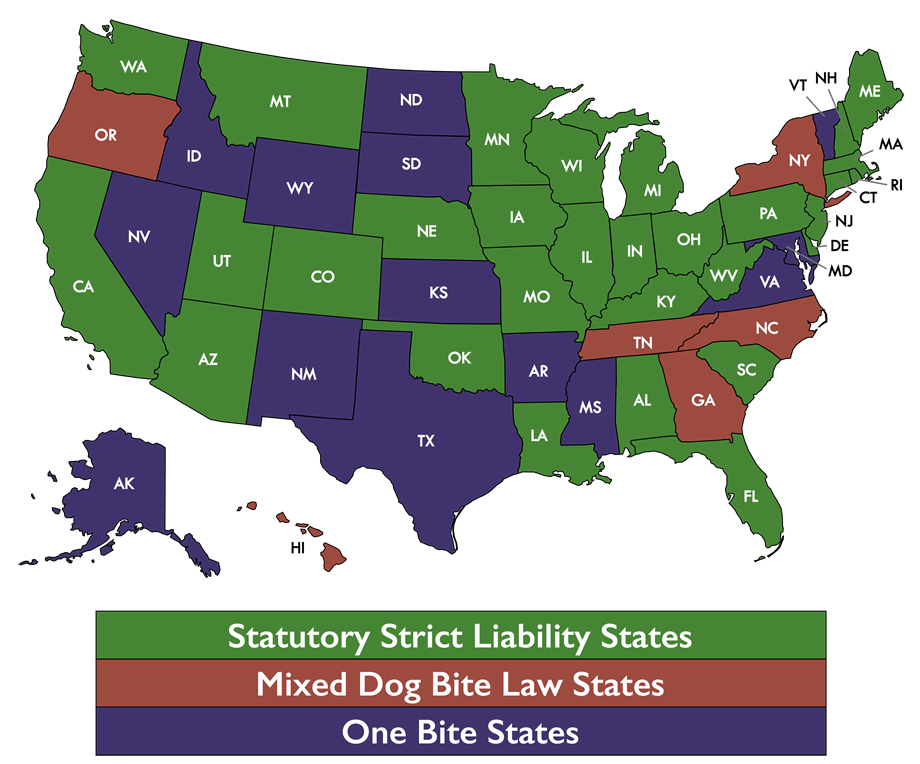 As a general rule, a dog does not get "one free bite" in a statutory strict liability state, the prior behavior of the dog is not an issue, and it is unnecessary to prove that the owner or handler was negligent. The dog bite statutes differ in their scope; depending upon the jurisdiction, the dog bite statute might apply to non-bite injuries as well as bites, to non-owners who have custody, control or a financial interest in the dog (i.e., a "keeper" or "harborer"), and/or to injuries suffered to property or by animals owned by third parties. They might even require proof of negligence or scienter (in which event they are "mixed law statutes," discussed below).

The dog bite statutes vary greatly from state to state, in wording and interpretation. For example, Minnesota courts have held that the dog bite statute imposes absolute liability, excepting only provocation and failure to act peacefully. In Pennsylvania and Colorado, the dog bite statute applies to a bite that causes severe injury but not one that causes little injury. The Colorado statute makes the dog owner strictly liable only for "economic losses," not pain, suffering and other non-pecuniary damages, which can be awarded only if the victim can meet the proof requirements of a "one bite state." In Maine and Tennessee, the dog bite statute applies only to bites that occur off the property of the owner or keeper (with exception), while in Alabama it applies only to bites that happen on the property (or if the dog chases a person off the property). The statute in Oregon covers only economic losses like medical bills and loss of income, while the one in New York covers just medical bills. The District of Columbia statutes apply only to situations where the animal is at large as a result of its owner's negligence.

The most common exceptions to liability are these:

The exceptions also vary greatly from state to state. Some states allow no exceptions at all to the wording of the statute. For example, Montana does not permit the defense of comparative negligence or any other affirmative defenses; the only permissible defenses are provocation and trespass because these are mentioned in the statute itself. Stroop v. Day, 271 Mont. 314 (1995); see also, Quellos v. Quellos, 643 N.E.2d 1173 (Ohio Ct. App. 1994); Massey v. Colaric, 725 P.2d 1099 (Ariz. 1986); Seim v. Garavalia, 306 N.W.2d 806, 811-12 (Minn. 1981); Nicholes v. Lorenz, 237 N.W.2d 468 (Mich. 1976). Other states have unique exceptions, such as Florida, which makes the dog bite statute inapplicable if the dog owner had posted "Bad Dog" signs on his property. Again, note that there may still be liability under other legal theories even if the dog bite statute does not apply in a particular case. An attorney should be consulted if the dog bite statute seems to not apply. For more about this, see Does An Adult Need a Lawyer For a Dog Bite Claim?, and Should Parents Get a Lawyer For Their Injured Child?

There are several states that have incorporated the "one bite rule" into their dog bite law in a significant way, despite having statutes that impose liability for dog bites. These states are referred to as "mixed dog bite statute states." Georgia, Tennessee and New York are example of such states. In New York, for instance, the dog bite statute provides that a dog owner is responsible only for paying the victim's medical bills; to collect the full range of damages, such as for loss of income if the victim is permanently disabled, the plaintiff must prove that the dog previously behaved viciously toward a human being. The District of Columbia is a "mixed state" because its animal liability laws rest on the one bite rule except where the dog owner's negligence resulted in the attacking dog being at large.

Other states impose conditions upon a victim who attempts to employ the dog bite statute. For example, in Massachusetts the courts have held that the victim has the burden of proving that he was not "committing a trespass or other tort" and was not "teasing, tormenting or abusing" the dog. Sullivan v. Ward, 304 Mass. 614, 615-616; Curran v. Burkhardt, 310 Mass. 466, 467; Rossi v. DelDuca, 344 Mass. 66, 69. This burden can work a grave injustice upon a person who was mauled so severely that he cannot remember exactly what occurred.

Procedural and other laws can restrict a victim's right to bring a dog bite claim. The most important of these is the statute of limitations, which places an outside time limit upon all claims. See Beware of the Statute of Limitations. But even custody of a child can be a consideration in a dog bite case. The parent having legal and physical custody of a child is entitled to bring an action for the child's personal injuries from a dog bite. If the other parent also brings an action, the parent having total custody can have the other parent's action dismissed. Murphy v. Bergo, 400 N.W.2d 387 (MI Ct. of App., 1987).

Do not assume that your state has established any of the "usual" exceptions to liability. You must research the availability of any particular defense in your own state.

Set forth below are the 38 jurisdictions (37 states and the District of Columbia) that have dog bite statutes or more general animal liability statutes that cover dog bites. In addition to these states, there are counties and cities in the USA that have ordinances which impose strict liability on dog owners for bites and non-bite injuries. To learn more, click on the name of the state you are interested in. If you do not see it on this list, type its name into the Google search box at the top of this page, and find it that way. It is important to note that even if your state does not have a strict liability dog bite statute, your county or city might have one. Therefore one must always retain a lawyer for a dog bite case, or research the law of the applicable state, county and city.

* Please note that the states listed above with asterisks (*) have statutes that combine strict liability with elements of the one bite rule, but primarily rely upon the one bite rule. These are referred to as "mixed dog bite statute states" and are discussed in greater detail on other pages of Legal Rights of Dog Bite Victims in the USA.