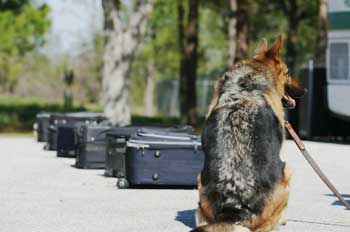 Dogs are often called upon to assist in law enforcement. Among other things, they can help detain a suspect, pursue a suspect (by tracking him), identify a suspect (by his scent), detect illegal substances (including bombs and controlled substances like illegal drugs), deter crime, protect officers, and control crowds.

Testimony showing that a dog pursued or tracked a fleeing suspect to the site where he was hiding may be admissible under some circumstances. (See People v. Malgren (1983) 139 Cal.App.3d 234, 237-238, disapproved on other grounds in People v. Jones (1991) 53 Cal.3d 1115, 1144-1145 [allowing evidence that the defendant was tracked from the victims' house to some bushes less than one mile from the house, with the dog on the trail within a half hour of the incident]; and People v. Craig (1978) 86 Cal.App.3d 905, 910-911, 915-917 [allowing use of dog tracking evidence where the suspects were followed from their stolen getaway car to the point inside an apartment complex where they were detained]. But compare People v. Gonzales (1990) 218 Cal.App.3d 403 [reversing a conviction where a dog found the defendant in a vineyard less than one mile from a home that was burglarized half an hour earlier].)

Testimony that a dog identified a suspect by his scent may be admissible if the techniques for scent tracking achieve acceptance and a proper foundation is provided for the admissibility during trial. Kondaurov v. Kerdasha, 271 Va. 646 (Va. 2006); People v. Willis (2004) ___ Cal.App.4th ___ , 2004 DJDAR 1010. See discussion, below.

Testimony that a dog alerted officers to the presence of illegal drugs is generally admissible. (United States v. Place, 462 U. S. 696 (1983).) This is true even when officers are stopping an individual for a routine traffic ticket; as long as the traffic stop is based on probable cause, the police have the right to employ a drug-sniffing dog to walk around the car and attempt to discern the presence of illegal drugs inside it. (Illinois v. Caballes, 543 U. S. ____ (2005), 01-24-2005, docket no. 03-923.)

Example of a dog scent case

Ryan Willis was charged with the first-degree murder of his former girlfriend, Crystal Stahl. Several people witnessed Willis physically abusing Stahl while they were dating. After Stahl broke up with Willis, he told his friends that he would kill her by setting her taxicab on fire. A few weeks later, Stahl's charred body was found in her taxicab, which had been set on fire.

During the trial, the state offered evidence that a bloodhound had detected Willis' scent at the crime scene. Willis objected, arguing that scent transfer unit (STU) technology was not scientifically reliable. The trial court admitted the STU evidence. Willis was convicted.

The Court of Appeal affirmed the conviction but ruled that the evidence should not have been admitted. The use of new scientific techniques at trial requires proof of reliability. The dog handler who testified for the state was not a scientist and, thus, was not qualified to establish that STU was widely accepted in the scientific community. There was no proof that the handler used correct scientific procedures while employing the STU. There were also several foundational weaknesses because it is unclear how long a scent remains on objects or whether each person has a unique scent. Thus, it was held that the trial court improperly admitted the STU evidence.

However, there was abundant evidence pointing to Willis' guilt. The Court of Appeal felt that it was not reasonably probable that the jury would have reached a different result in the absence of the STU evidence. Thus, the trial court's error was regarded as harmless, and the conviction was upheld. (People v. Willis (2004) ___ Cal.App.4th ___ , 2004 DJDAR 1010.)

The Willis case illustrates a number of issues. In all states, the trial judge rules whether evidence is admissible. When the evidence is supposedly scientific, California judges apply the rule announced in People v. Kelly (1976) 17 Cal.3d 24. The Kelly rule applies to new scientific techniques, especially in cases involving novel devices or processes. To protect the jury from scientific techniques that convey a misleading aura of certainty, a new technique must be subjected to a three-part test of reliability. First, there must be proof that the technique is considered reliable in the scientific community. Second, the witness testifying about the technique must be a qualified expert on the subject. Third, there must be proof that the person performing the test used correct scientific procedures. The analysis is needed where the evidence is so foreign to everyday experience that it is difficult for laypersons to evaluate merely using their own common sense and good judgment. (People v. Mitchell (2003) 110 Cal.App.4th 772, 782-783.)

The Court of Appeal in the Willis case found several things wrong with the STU evidence. The dog handler was not a scientist, so he was not capable of testifying that the STU was accepted throughout the scientific community. There was also no proof that the dog handler used correct scientific procedures while employing the STU. To make this evidence admissible, the court established a blueprint for prosecutors in the future:

[A] foundation must be laid from academic or scientific sources regarding (a) how long scent remains on an object or at a location; (b) whether every person has a scent that is so unique that it provides an accurate basis for scent identification, such that it can be analogized to human DNA; (c) whether a particular breed of dog is characterized by acute powers of scent and discrimination; and (d) the adequacy of the certification procedures for scent identifications. (People v. Mitchell, supra, 110 Cal.App.4th at pp. 791-792.)

In October 2013, a police watchdog organization accused the Los Angeles Sheriff's Department of overusing its dogs to bite suspects, rather than to find and corner them. Worse, it was found that the overwhelming majority of the victims were black and Latino. See the National Public Radio article, In Los Angeles County, It's 'Bark and Hold' vs. 'Find and Bite', which includes the remarks of Attorney Kenneth M. Phillips.

Experts agree that police use of dogs is justified as long as the dogs are maintained in their training and the handlers are supervised adequately. It is known to many, however, that many of the dogs go out of training because of handlers who like the dogs to bite people, and furthermore, that the handlers are not supervised to the extent that they should be in order to prevent people from being injured unnecessarily. See the extensive article by Alexandra Semyonova, Police dogs should be trained as officers, not equipment, published at Animals 24/7.

To eliminate such problems, bite incidents should be thoroughly reviewed to determine whether the dog was necessary, the handler issued the correct commands, the dog responded correctly to the commands, and the use of force was justified. Additionally, the severity of the crime, behavior of the victim, and personal characteristics of the victim such as race and ethnicity should be tracked to determine whether dogs are used against certain people and not others.

Dangerousness of police and military dogs

Police dogs are highly dangerous as a result of their training. They are taught a bite-and-hold technique for subduing individuals suspected of felony crimes. This bite-and-hold technique's greater applied force results in a unique spectrum of injuries, including deep puncture wounds, severe crush injuries, large tissue avulsions and lacerations, wounds necessitating surgical débridement, bony injuries ranging from cortical violations to displaced fractures, neurovascular damage, and other wounds at high risk for infection.

Find-and-bite police dogs are especially dangerous not only because of their training but because they tend to be larger breeds, weighing 70 to 90 pounds or more. P.C. Meade, "Police Dog and Domestic Dog Bite injuries: What are the Differences?," 37 Injury Extra 395, 399 (2006), available at sciencedirect.com. These dogs are taught to inflict forceful bites using all of their teeth. Id. The force of a trained dog’s bite is between 1,200 and 2,000 pounds per square inch. Vathekan (above) 154 F.3d at 177 n.3 (citing Douglas U. Rosenthal, Note, When K-9s Cause Chaos — An Examination of Police Dog Policies and Their Liabilities, 11 N.Y.L. Sch. J. Hum. Rts. 279, 296 (1994)). This amount of force is comparable to an automobile wheel running over a body part. Miller, 340 F.3d at 962.

The special qualities and training of military dogs, and the unusual dangerousness of them, is discussed in Unleashing the Dogs of War: Using Military Working Dogs to Apprehend Enemy Combatants, Major Charles T. Kirchmaier, The Army Lawyer, Department of the Army Pamphlet 20-50-401, October 2006.

Liability for injuries by police dogs

State statutes and cases give police and military officers special protection when their dogs inflict injuries on people in the course of making arrests. There is no protection, however, for excessive force, violating civil rights, or causing injuries outside the scope of proper law enforcement activities. For example, the California dog bite statute makes a city or county liable for bites inflicted by a police dog --

2. If the police department had not previously adopted a written policy on the necessary and appropriate use of a police dog.

If the victim was a participant or suspect and the law enforcement agency had the written policy set forth above, the city or county will not be held liable under the statute if the dog was defending itself from an annoying, harassing, or provoking act, or assisting an employee of the agency --

1. In the apprehension or holding of a suspect where the employee has a reasonable suspicion of the suspect's involvement in criminal activity.

2. In the investigation of a crime or possible crime.

3. In the execution of a warrant.

4. In the defense of a peace officer or another person.

In a case handled by Attorney Kenneth M. Phillips, for example, a tourist walking with his luggage was invited into a police car but was bitten on the hand by a police dog. No crime had been commited or was suspected of having being commited. The handler had not commanded the dog to attack but it did so anyway. Initially the city attorney asserted that the tourist was to blame for having opened the door of the police car (despite having been invited into the car). However, it was revealed through discovery that the same dog attacked a police officer 3 months later, resulting in his disability for a number of months. Phillips' client ended up winning a substantial settlement.

Interestingly, after these two events the dog was not put down, but was given away. The city that bought the dog sustained big losses because this highly trained animal acquired from a German company ended up assaulting and injuring a tourist and at least one police officer.

The US Court of Appeals has ruled that a suspect can sue a police officer for arresting the suspect with a police dog that inflicts excessive harm on the suspect. In Becker v. Elfreich, the court stated:

"When Evansville police attempted to arrest Jamie Becker, Officer Elfreich released his police dog under the belief that Becker was hiding in the house. However, two seconds later, Officer Elfreich discovered Becker had been descending the stairs to surrender with his hands above his head. Nonetheless, Officer Elfreich continued to allow the police dog to bite Becker, while pulling him down three steps and placing his knee on his back and handcuffing him. ... While it is unclear from the record whether Axel presented a substantial risk of serious risk bodily harm (and thus deadly force), the force was clearly at the more severe end of the force spectrum.... A jury could reasonably find such force was excessive. Further, because it was clearly established at the time of Becker's arrest that no more than minimal force was permissible to arrest a non-resisting, or passively resisting, suspect, Officer Elfreich was not entitled to qualified immunity on this record." See James Becker v. Zachary Elfreich, May 2016, no official citation at the time of this writing.

Direct to your desktop.
Available now.
Cheaper than the cost of typing them.