It’s Time for the Pit Bull “Recall” Too

The recall of the Jeep is a reminder that effective laws can and should be enacted to lessen or eliminate another source of preventable deaths and injuries: the modern pit bull.

On June 18, 2013, Chrysler agreed to recall 2.7 million Jeeps because in 14 years there have been at least 37 Jeep accidents that caused at least 51 deaths. (Chris Isidore, Chrysler relents, agrees to recall 2.7 million Jeeps, clickorlando.com, June 18, 2013.) Compare those numbers with deaths caused by pit bulls: in 7 years (half the number of years), pit bulls have killed 151 Americans (three times as many as those killed in Jeeps). (Colleen Lynn, Dog Bite Fatalities, dogsbite.org, June 18, 2013.)

There are those who believe it is at least as important to fix the pit bull problem as it is to fix the Jeep problem. There are between 2.5 to 3.4 million pit bulls in the USA today. (Merritt Clifton, More adoptions will not end shelter killing of pit bulls, Animal People Online, June 18, 2013.) These dogs are responsible for 45% of all fatal attacks and more than half of all disfiguring attacks. (Clifton, ibid.) Attacks by pit bulls are associated with higher morbidity rates, higher hospital charges, and a higher risk of death than attacks by other breeds of dogs. (Bini, John K. MD; Cohn, Stephen M. MD; Acosta, Shirley M. RN, BSN; McFarland, Marilyn J. RN, MS; Muir, Mark T. MD; Michalek, Joel E. PhD; for the TRISAT Clinical Trials Group, Mortality, Mauling, and Maiming by Vicious Dogs, Annals of Surgery (April 2011, Vol. 253, Issue 4, pp. 791–797).

Leaving out those who believe there is no pit bull problem at all, there generally are 3 schools of thought about a possible “fix.” Some believe that no new laws are needed because responsible pit bull owners can be relied on to breed a mentally stable model and keep the dog out of dangerous situations. A second cohort favors breed-specific laws that will keep these dogs away from the wrong people, places and situations. The third group wants to reduce the breed’s numbers and/or eliminate it. (Dogbitelaw.com, Arguments for and against breed specific laws, June 13, 2013.) 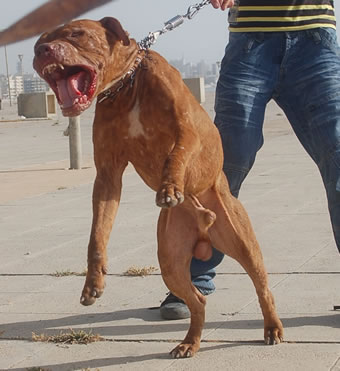 Unfortunately, pit bull lovers have neglected the problem for too long. Worse, they have alienated the general public by failing to denounce the “nutters” who spread misinformation about the members of this breed, which generally are not “nanny dogs,” service dogs, or rescue dogs. The general perception about the pit bull is quite negative: it is regarded as the dog of choice among criminals, gang-bangers and others who cannot be relied upon to breed a better, gentler pit bull. And generalizations about the dog’s owners are just as bad: a study published in the Journal of Interpersonal Violence confirmed a link between ownership of high- risk dog breeds and deviant behaviors, crimes against children and domestic violence. (Jaclyn E. Barnes et al., Ownership of High-Risk ("Vicious") Dogs As a Marker for Deviant Behaviors, J. Interpersonal Violence, Volume 21 Number 12, December 2006 1616-1634.)

It appears that the time has come for the big pit bull recall, at least metaphorically. If outlawing the dog is not politically possible, then let’s fix them, i.e., neuter them. This is a solution that has nearly universal acceptance. As stated in Animal People, “an effective response to pit bull overpopulation must target breeding, and must be legislatively mandated, since pit bull breeders have proved intransigently resistant to any and all forms of gentle persuasion.” (Merritt Clifton, More adoptions will not end shelter killing of pit bulls, 2009.) Ingrid Newkirk, the president of People for the Ethical Treatment of Animals, wrote in the San Francisco Chronicle on June 8, 2005, that PETA “encourage[s] a ban on breeding pit bulls.” Even a state like California, which generally prohibits breed-specific laws, allows local jurisdictions to pass “breed-specific ordinances pertaining only to mandatory spay or neuter programs and breeding requirements, provided that no specific dog breed, or mixed dog breed, shall be declared potentially dangerous or vicious under those ordinances." The intent of these laws is to permit cities and counties to regulate breeds by requiring members of the breed to be spayed or neutered.

Like Chrysler agreed to fix the Jeep, the pit bull community should have decided to fix the pit bull. But that did not happen, and the sharp rise in mayhem and the number of these dogs seems to have ended the opportunity. At this point, states, cities and counties should enact breed specific laws that, at the very least, will prevent the breeding of pit bulls and thereby eliminate this clearly defective and destructive breed of dog over the course of time.