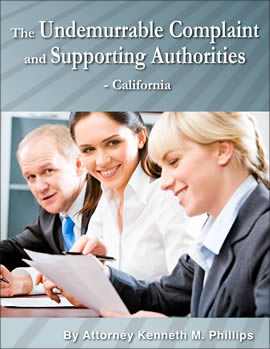 Download this file in rich text format which works in any word processor.

A Complaint that will not only stick, but frighten, backed by Points and Authorities. Here’s the quickest, easiest and cheapest way to kick off your dog bite cases, big and small. You get the following causes of action:

Every allegation of each cause of action is included, and every one is backed with Points and Authorities that have been tested in court and won the day.

This Complaint is used by Attorney Kenneth M. Phillips, the author of Dog Bite Law (dogbitelaw.com) in most of his California dog bite cases. It will save you many hours of research prior to filing, and you will have peace of mind knowing that you covered all the bases.

No demurrer against it has ever been sustained, or motion to strike granted. If the defense attorney in your case attempts any such thing, the Points and Authorities for your opposition memorandum are right here.

Strategic considerations - why you need this

Attorney Kenneth Phillips has been filing dog bite cases for 26 years. For some reason, defense lawyers occasionally file demurrers and motions to strike against his Complaint. Not a single one has ever been granted. The reason should be obvious: he does nothing but represent the families of people killed by dogs, and dog bite victims who are disfigured or permanently disabled. So he knows what to allege, what to avoid and how to argue, including not just the Points and Authorities but also the policy considerations that win the day.

The Undemurable Complaint has three killer causes of action in addition to the four basic ones that you should include for almost every case. The killers are –

The Battery cause of action, with its allegations supporting punitive damages, gets plenty of attention all the time! Phillips uses this legal ground when the defendant has done something out of the ordinary such as promising to keep the dog in a cage because of its tendency to bite but then letting the dog out despite knowing that the victim was present. The allegations can be tailored to fit a number of situations that arise all too frequently.

Landlord Liability is extremely important because renters who own dogs usually do not have renters insurance. This means you have to consider other targets who can provide compensation, and the first on the list is the landlord. But alleging a dog bite case against a landlord is a tricky and precise task because California courts require a plaintiff to allege that the landlord had the right kind of knowledge of the danger. Just about any time you allege landlord liability you're going to face a demurrer and thus will need our Points and Authorities.

You're wrong if you think you can get away with just alleging statutory strict liability pursuant to the California dog bite statute. All three of the articles that Phillips has written for Trial Magazine, as well as his seminar called Tips and Tricks for Dog Bite Lawyers, warn against relying on strict liability because (a) jurors who own dogs hate it, (b) jurors who don't own dogs think it's a clever loophole exploited by a greedy lawyer and thus are not motivated by it, (c) judges will not admit evidence of wrongdoing because it is irrelevant in a strict liability case, (d) defense attorneys are aware you can't get your evidence of wrongdoing in front of the jury so they admit liability to make you and the plaintiff look like you're trying to get too much money, and (e) you will lose the case if the jury believes that the injury was caused by a scratch rather than a bite, or if you cannot prove that the defendant was the owner of the dog. Therefore you need to allege negligence and common law liability for scienter (i.e., the dog had the dangerous propensity to bite).

Negligence Per Se is based on the violation of an animal control ordinance such as the "leash law." Most attorneys don't realize that about half of the leashes sold to dog owners result in prima facie leash law violations because these leashes are more than 6 feet in length. Also, common occurrences like tying up a dog, letting a child walk a dog, and owning too many dogs are all violations of typical animal control ordinances. So this is a powerful ground because it allows you to reach the "reptile brain" that fears going out onto the street and getting attacked by a dog. But when you allege Negligence Per Se, expect a demurrer on the spurious ground that it isn't a separate cause of action. Win it with our Points and Authorities.

Cut, paste and win! Download now and take the night off!

Download this file in rich text format which works in any word processor.