Tyler Huston was killed by pitbulls on January 3, 2016, at age 9. His sister, Alexandria Griffin-Heady, 24, left him in her mobile home with her three pitbulls. The boy was asleep on a bed which was next to a small cage. According to her, the cage contained two of the pitbulls. She left for work and three hours later returned to find the roof of the cage bent off and her brother savagely mauled. He died of his injuries the same day.

After investigating, the Sheriff recommended criminal charges against Heady. The dogs previously had escaped from the cage. It had been breaking apart; Heady had applied a padlock on each door and single zip tie on its roof to hold it together. She knew the dogs previously had attacked her niece, were destructive and that Tyler did not know how to be safe around them. The Sheriff thus recommended child endangement charges against her.

On Good Friday, right before the Easter holiday, Yuba County District Attorney Patrick McGrath released a 7-page press release explaining why he declined to file criminal charges against Heady. Essentially he stated that she was not guilty of child endangerment. Here is the press release in full (click on it to see it all): 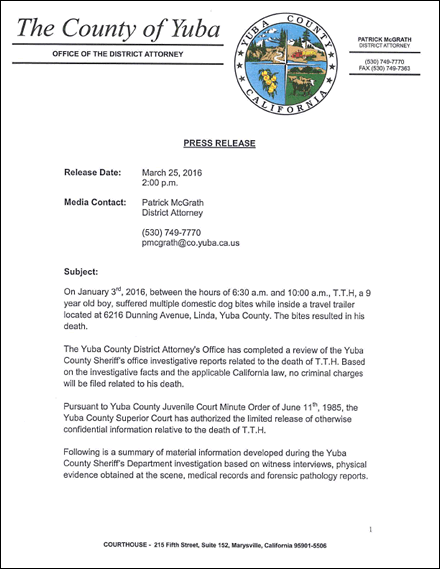 District Attorney Patrick McGrath's decision in this case was both cowardly and wrong. It was cowardly because it demonstrated not a thirst for justice or truth but rather a fear of failure. All the prosecutor had to do here is submit the case to either the court or the grand jury. The court would hold a preliminary hearing to decide whether Heady should go to trial on criminal charges. If the DA did not want the public or Heady to see the evidence against her, the grand jury would review the case in secret and either indict her or not indict her.

Is the brutal killing of a sleeping child not worth the effort? Keep in mind that when Diane Whipple was killed by Presa Canario dogs in 2001, the grand jury indicted Marjorie Knoller for second degree murder and the trial jury convicted her of it, even though the prosecutors didn't even ask for the murder charge. What this should tell us is that McGrath and other prosecutors need to align their thinking with that of the public who, as a whole, are furious at irresponsible dog owners.

The other telltale sign of cowardice is evident from how McGrath made his decision known. His press release went out at 2:00 PM on Good Friday, before the Easter holiday (see the date and time on page one of the release itself). Anyone familiar with news cycles knows that the timing was carefully calculated to not get any publicity. This was not the action of a righteous man.

To make matters worse, McGrath's decision was not just cowardly but downright wrong. The seven-page press release explains in detail why Heady should not be prosecuted for child endangerment. But the crime was not child endangerment, it was owning a mischievous animal that killed a person. This is a well-known criminal provision that has been at the heart of every fatal dog attack case in California for the past 25 years.

The crime was keeping a mischievous animal

Tyler Huston was not "endangered," he was killed. District Attorney McGrath's press release proves that he overlooked the real crime. It was not child endangerment. The young boy was savagely mauled to death because Alexandria Griffin-Heady had dogs which she knew were “mischievous” and which she failed to confine properly. California Penal Code section 399(a) makes it a felony to keep a “mischievous” animal without ordinary care if it kills a person. “Mischievous” is a legal term that refers to tendencies which may naturally pose a risk of harm or injury to others.

Marjorie Knoller and Robert Noel are the most infamous of those who have been convicted under California Penal Code section 399. They owned the Presa Canario dogs that killed Diane Whipple in 2001. Under similar circumstances, other defendants have also been convicted under section 399. Recently in a case that Attorney Kenneth M. Phillips handled, Brian Hrenko, 62, was convicted under section 399 in connection with the pitbull killing of Claudia Gallardo in Stockton, California, on April 11, 2013. Some of the other published cases over the past 25 years include:

There are at least 147 reasons to prosecute Heady, because 147 children have been savagely slaughtered by pitbulls since 1980. When a pitbull owner is convicted of a crime having substantial jail time, it sends a message to all dog owners. The message is that their selection and care of a companion animal has to be accomplished without negligence that could seriously injure or kill another innocent person.

More to the point, there is only one person who can speak for Tyler any more, who can accuse, who can achieve justice for him. Unless the Attorney General takes over this case, Tyler is represented by Patrick McGrath, the District Attorney of Yuba County. The prosecutor has every reason as well as legal grounds to take up this child's cause.

“Clearly Mr. McGrath should have considered whether Alexandria Griffin-Heady committed the same offense that other prosecutors have successfully relied on to obtain guilty verdicts in similar cases,” said Attorney Phillips in a statement released on April 7, 2016. “The public will never know whether Griffin-Heady committed this crime unless the case is filed in court or submitted to the Yuba Grand Jury.”

What we can do

On April 6, 2016, Attorney Kenneth M. Phillips requested in writing that District Attorney McGrath reconsider his decision to not file criminal charges or seek an indictment against Alexandria Griffin-Heady. Assuming that Mr. McGrath will not reverse his decision, the public should call on California Attorney General Kamala Harris to review the case in light of section 399 of the Penal Code and to commence the prosecution of Griffin-Heady if a full reconsideration of the law and facts support it.

Any member of the public can download the following letter to the Attorney General (just click on it and then print it out). Insert the date at the top, print your name after "Sincerely," sign it, add your address below your signature, and mail it to the address which is set forth on the letter itself: 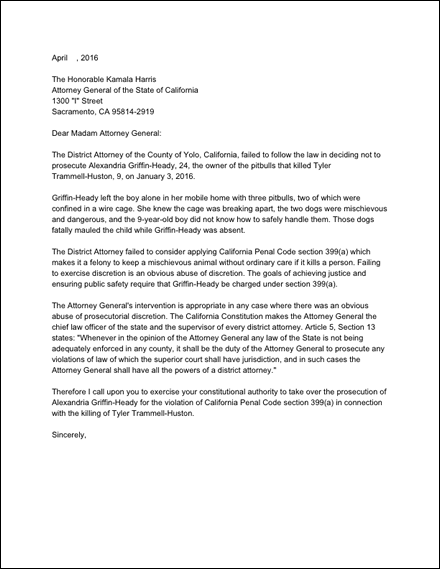 The purpose of the letter is to ask the Attorney General to take over the case on the ground that the applicable law was disregarded. We are not accusing Griffin-Heady of a crime because we do not have access to all of the evidence, but we are asking that the case against her be reviewed in light of section 399 and the full circumstances. Our goal is to prompt a thorough re-examination of the case so that justice will be served. The child and all of us are entitled to as much. 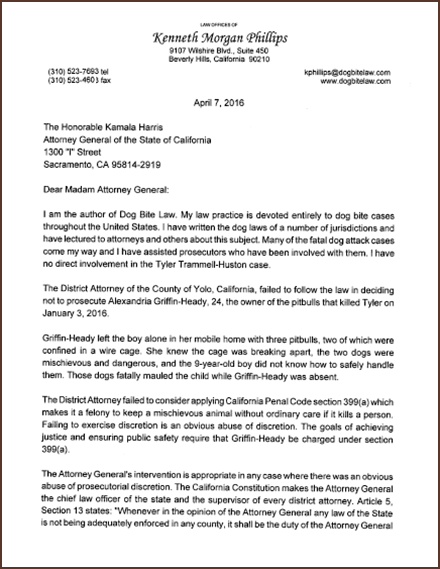