Pit bull owners often say that the dog is not dangerous because pit bulls have not been proved to bite people more often than other dogs bite people. Nevertheless, it has been proved that the injuries inflicted by pit bulls are far worse than injuries caused by other common breeds of dog. See the study in Annals of Surgery conducted by physicians which concluded that attacks by pit bulls are associated with higher morbidity rates, higher hospital charges, and a higher risk of death than are attacks by other breeds of dogs.

One cannot help but remember Darla Napora, 32, the pregnant woman who was mauled to death by one of her own pit bulls. She belonged to a group which was campaigning to convince people that pit bulls are not dangerous. The name of that group was "Dog Lovers Responsible about Pit Bulls." Her dog bit her dozens of times in her body and face, killing her and her unborn child. (Read the article.) This was not an anomaly: in recent years the vast majority of canine homicides have been inflicted by pit bulls. 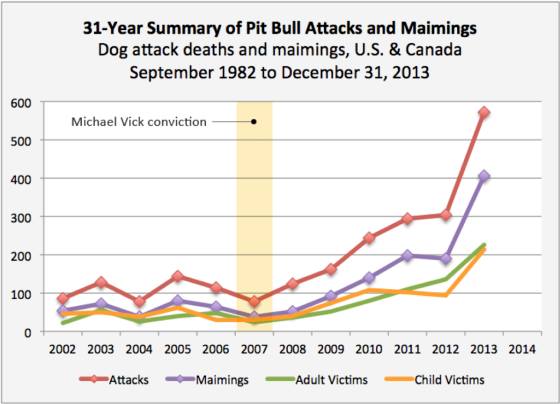 The annual cost resulting from fatal maulings by pit bulls has been estimated at more than $100 million per year. Merritt Clifton, Punishing the Deed Costs Twice As Much As Banning Dogs of Fighting Breed.

If pit bulls are not to be banned altogether, the breed certainly must be restricted as to who may own it, where it may live, and how it is to be confined and restrained whether on public or private property. See Keep Certain High-Risk Dogs Away From the Wrong People, Places and Situations.

Public resistence to laws regulating pit bulls is largely based on ignorance and misinformation about the breed. For example, when NFL quarterback Michael Vick was caught operating a dog fighting operation, his 48 pit bulls were seized. Later they were sent to animal rescue organizations. A myth sprang up that the dogs were rehabilitated and safely live with people, but in fact only 10 were placed in homes by one organization, 12 live in solitary confinement because they cannot interact with anything living, one was euthanized because of severe aggression, and 25 others were sent to "rescue" groups around the USA that have not revealed the dogs' present whereabouts. See Liz Marsden, Pit Bull Wisdom and Dog Pound Foolishness.

In England, dog attacks surged 76% when the ban on pit bulls was lifted. See Merritt Clifton, Dog attacks surge 76% in England in 10 years, coinciding with exemption of Staffordshire pit bulls from the Dangerous Dogs Act.

Since the inception of dogbitelaw.com in 1998, pit bull owners were urged to commence the following strategy: breed pit bulls for nonviolent tendencies, report all violations of animal control laws, and get educated about the proper care, handling and confinement of pit bulls. However, this advice was not taken. At present, therefore, many experts now advocate breed specific laws designed to reduce the pit bull population, at the very least.

For further reading: Arguments for and Against Breed Specific Laws; Preventing Dog Bites: Keep Certain High-risk Breeds Away from the Wrong People, Places and Situations