The Problem With Statistics 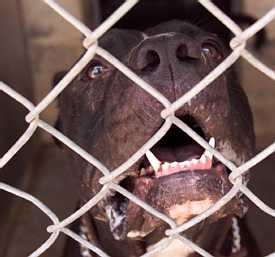 The conclusions that we draw about dangerous canines is derived from what we know about them. The problem is that we do not know enough. Attitudes about dogs can cloud the truth about them.

Our information primarily comes from our own random experiences, accounts by friends and family, and what we pick up from the news and our culture. Norman Rockwell painted illustrations of dog bites and made them look prosaic. Movies like "Ferris Beuller's Day Off" made them look like great fun.

We are conditioned to believe that dogs are our furry friends and that dog bites are no big deal. In an age of political correctness, we are unnecessarily sensitive to the possibility of offending even people whose conduct borders on the intolerable. We also have forgotten the real purpose of laws against discrimination, namely that they were intended to prevent invidious discrimination - treating a class of persons unequally in a manner that is malicious, hostile, or damaging. Note the word "persons."

There are unreasonable people who deny that dog bites are a problem and that dogs which were bred to kill will do so because it is their nature to do so. When these people read about a fatal attack on a person, they jump to the conclusion that the victim was at fault, that the dog was trained to kill, or that the media account wa exaggerated. They bring their pit bulls to memorials dedicated to people killed by pit bulls, and sit with their pit bulls in front of the crosses erected to the memory of the deceased. They accuse their critics of "discrimination" as if their favorite breed of dog were a race of human beings.

The confusion could be avoided if we knew more. Although there always are people who adhere to an unreasonable position, the vast majority of us can get it right if there is enough information and the information is credible. The problem, however, is that we often do not have enough facts about the nature of any particular attack - whether it was an angry assault, a playful turn of the head that resulted in a tooth catching the victim's skin, or something in between.

This level of detail is not always necessary. The dog bite statutes do not make liability dependent on the reason why the tooth made contact with the victim. Nevertheless, there are issues that require more information than might be gathered in the course of a civil case or a criminal case. We need to know about viciousness when we debate the issue of breed bans, but do not care about it in a discussion as to whether dogs should be permitted in day care centers and hair salons.

Unfortunately, the nature of the attack is an inherently difficult issue to study on a wide-scale basis. To do so requires the questioning of witnesses and an impartial evaluation that is free of bias. In other words, it requires that we study depositions and trials or attend other proceedings where testimony is taken, such as legislative committee hearings and "dog court" hearings. This is feasible but has not been attempted to date. Karen Delise (author of Fatal Dog Attacks) illustrates the information problem in the following graphic way (quoted from her E-mail message sent to Attorney Kenneth Phillips):

A man was bitten in the forearm by a Pit bull. The bite was not serious but introduced into the wound was a virulent and fast spreading bacteria. The man died 4 days later from this virulent bacterial infection.

A teenage girl give birth to a infant, distraught and frightened, she tossed the hours-old infant into a neighboring-junk-strewn yard where two Pit bulls resided. The dogs killed the newborn.

A German shepherd mixed breed dog went into a bedroom, lifted a newborn out of a crib and carried the infant (by the head) into the living room  where the adults were seated.

A man restrains his girlfriend, while ordering his Pit bull to repeatedly attack her.  He is eventually convicted of murder and is serving a 20-year sentence.

An elderly man attempts to stop his German Shepherd dog from fence fighting with his neighbor's dog, the dog turns on his owner, severely mauling him, inflicting fatal head and neck wounds.

The CDC was right, in that five people died as a result of a dog bite. But were all these bites the result of aggression? Were they the same type or level of aggression? Which behaviors initiated the attack, human or canine? So the number of deaths by dogs (as per the CDC) cannot be used to define aggression, or the aggression of certain breeds, as aggression is not defined or qualified.

The disagreement among experts, and the dearth of recent statistics, are the reasons why even courts and lawmakers are confused about dangerous dogs and intolerable breeds of dog. See Breed Specific Court Rulings on dogbitelaw.com (giving examples of entirely opposite judicial conclusions about laws pertaining to pit bulls, based on statistics and challenges to statistics).

The problem with statistics on dog bites essentially is that we know more about the injuries and less about what caused them. We know a person was killed or disfigured by a dog, but we do not know why it happened. Worse, it seems like the reasons are actually unknowable. Given the dearth of information about causation, many believe that we have no choice other than to focus on the breeds that do the damage. (For more, see Breed Specific Laws on dogbitelaw.com.)